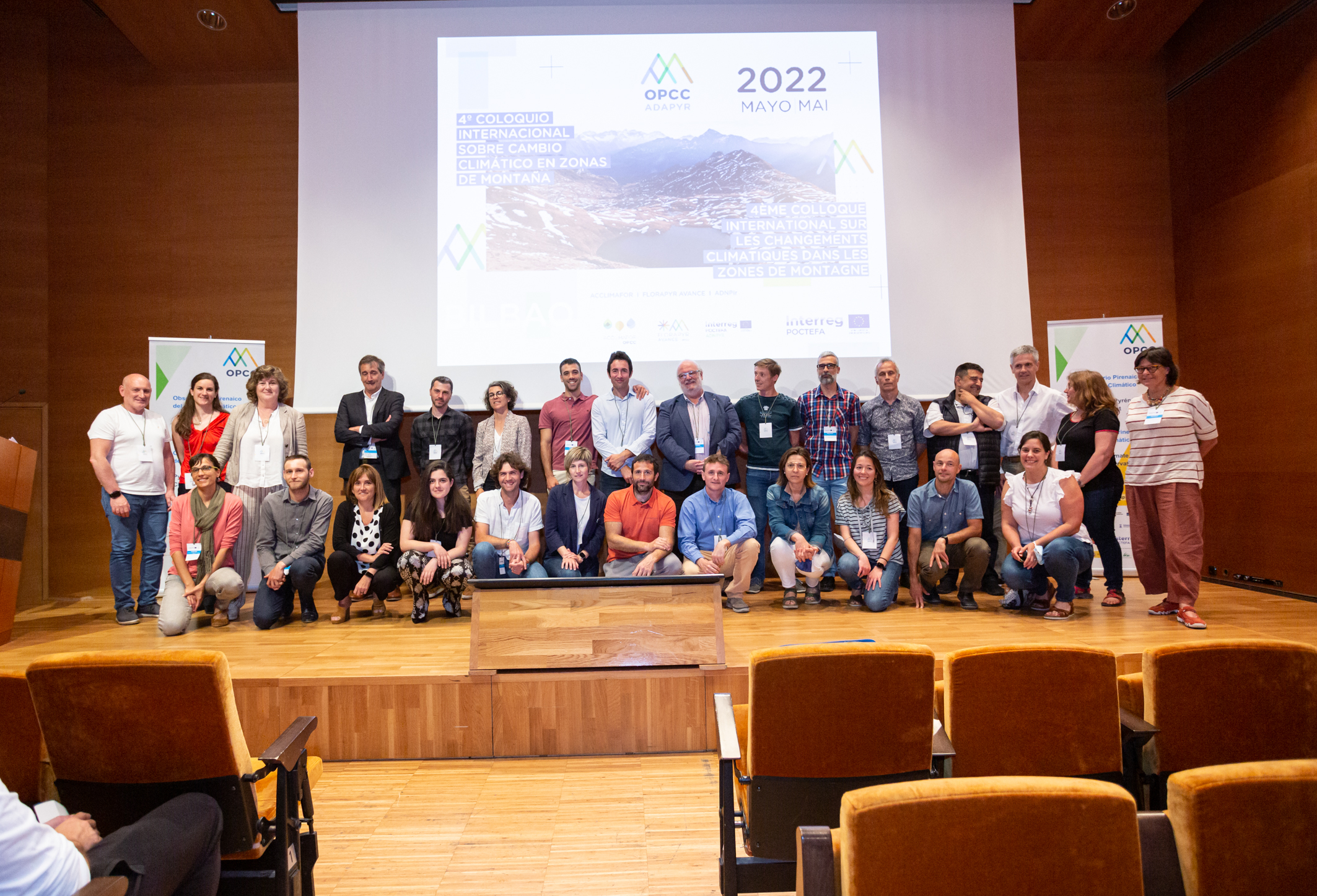 On 19 May 2022, the 4th International Colloquium on Climate Change in Mountain Areas took place in Bilbao, focusing on presenting the results of the OPCC-ADAPYR project. Led by the Pyrenean Climate Change Observatory (OPCC-CTP) and financed by the Interreg V-A Spain-France-Andorra programme (POCTEFA 14-20), this cross-border initiative for territorial cooperation on climate change brings together the 7 Pyrenean territories of Spain (Euskadi, Navarre, Aragon and Catalonia), France (Nouvelle-Aquitaine and Occitanie) and Andorra, which make up the Working Community of the Pyrenees (CTP). In addition, 12 organisations specialising in different fields participated in the project 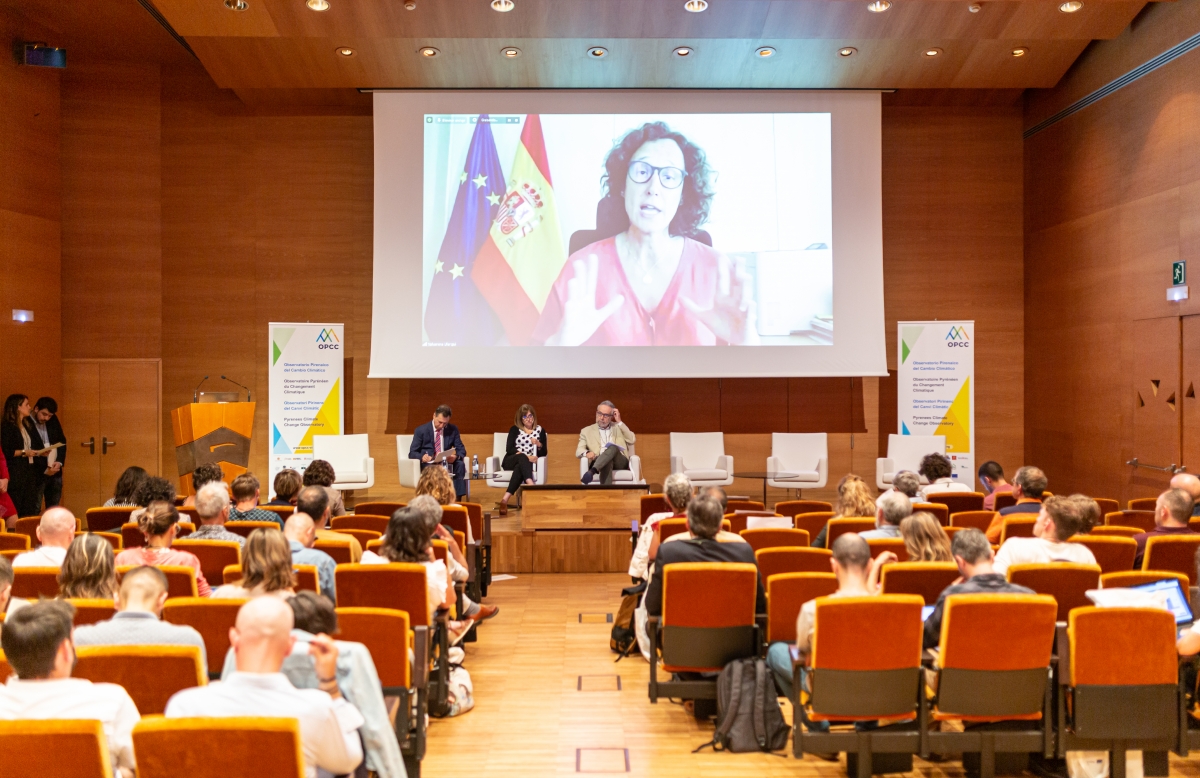 The project has had, among other objectives, the aim of systematising the monitoring of climate impact in the Pyrenees and defining a Pyrenean Strategy for Climate Change Adaptation which after two and a half years of work has been one of its main achievements: "There is no other cross-border adaptation strategy in Europe with a regional scope and which has been built on the basis of the participation of a multiplicity of Pyrenean entities. There is no other cross-border approach to climate change adaptation that addresses both the challenges of the areas involved and those of the mountains in the same territory", stressed Eva García Balaguer at the press conference organised in the Bilbao. The CTP (which set up the Observatory in 2010) has been working since 1983 and is currently chaired by the Basque Country. For this reason, and coinciding with the end of the OPCC-ADAPYR project, its results were presented on 19 and 20 May at the 4th international colloquium held at the Euskalduna Palace in Bilbao.

In addition to the CTP, the OPCC-ADAPYR project has had a team of partners from 11 other organisations, together with 30 other associated entities from both sides of the mountain range. These organisations from all over the Pyrenees have pooled and shared their knowledge and work on impacts, vulnerability and adaptation to climate change in various areas such as flora, fauna, glaciers and natural hazards.

An international colloquium to present the results

The press conference was attended by Mikel Antón, Director of European Affairs of the Basque Government and Secretary General of the CTP; Amaia Barredo, Deputy Minister of Environmental Sustainability of the Basque Government; Eva García-Balaguer, Coordinator of the OPCC; Sébastien Chauvin, director of GEIE Forespir and head of the ACCLIMAFOR project; and Gérard Largier, director of the Conservatoire Botanique National des Pyrénées et de Midi-Pyrénées (CBNPMP) and head of the FLORAPYR Avance project. 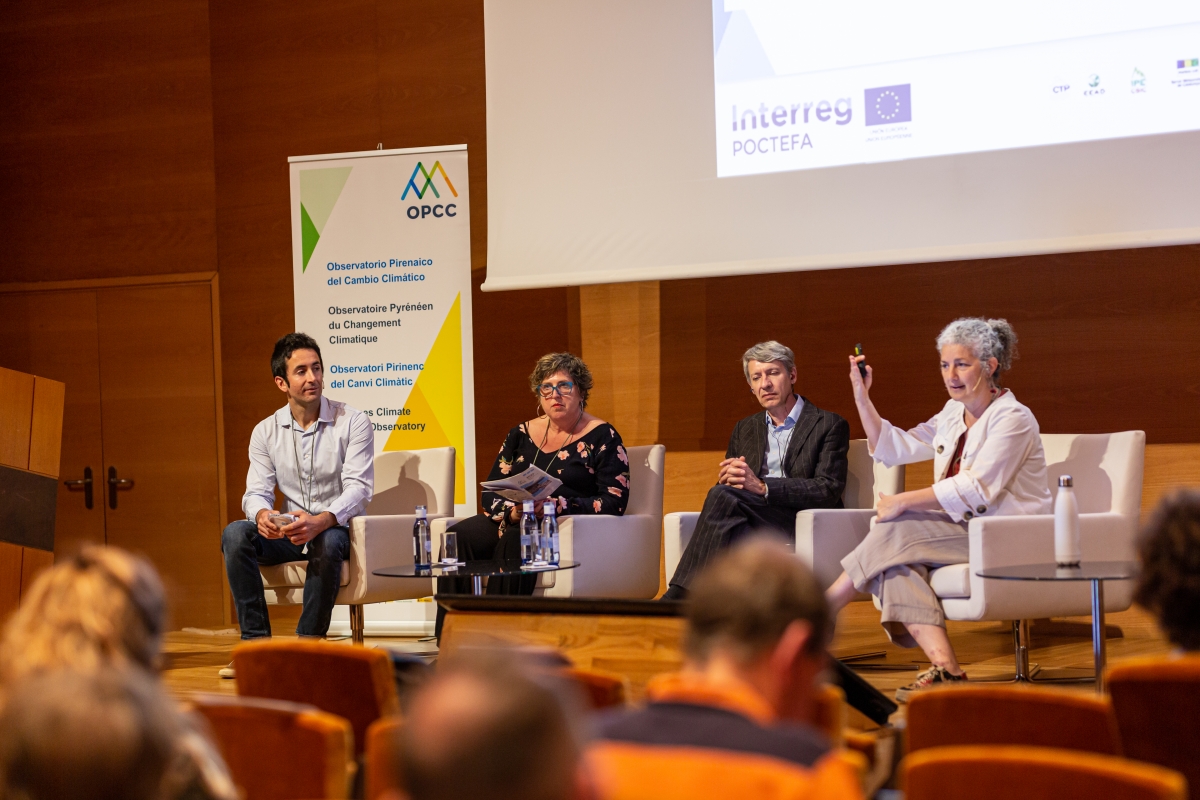 The meeting, and the project itself, are framed in a context of climate urgency, but demonstrates a willingness to act: "The Pyrenean Climate Change Observatory is one of our most emblematic initiatives, and in recent years it has taken on special meaning and strength. The climate emergency situation declared in our territories and worldwide makes it a fundamental tool for providing a more effective response to the climate challenge, based on inter-territorial collaboration and cooperation", said Mikel Antón.

For her part, the Deputy Minister for Environmental Sustainability of the Basque Government, Amaia Barredo, stressed in her speech that "the regions also have a responsibility that we cannot ignore. We need to work together, strengthening ties with other administrations, governments and regional and local initiatives in order to achieve climate goals, by committing to true multilevel climate governance. The Basque Country has experience in this, with projects such as LIFE Urban Klima 2050, the Basque network of sustainable municipalities Udalsarea 2030, or the ADAPYR project that brings us together today in Bilbao".

The main objective of the Colloquium, which welcomed more than 200 people to the Euskalduna Palace in Bilbao, was to share the results of the OPCC-ADAPYR project with the public, as well as to reflect on cooperation and climate action initiatives in Europe. It has been through several presentations and round tables promoted by the CTP and the rest of the partner entities. 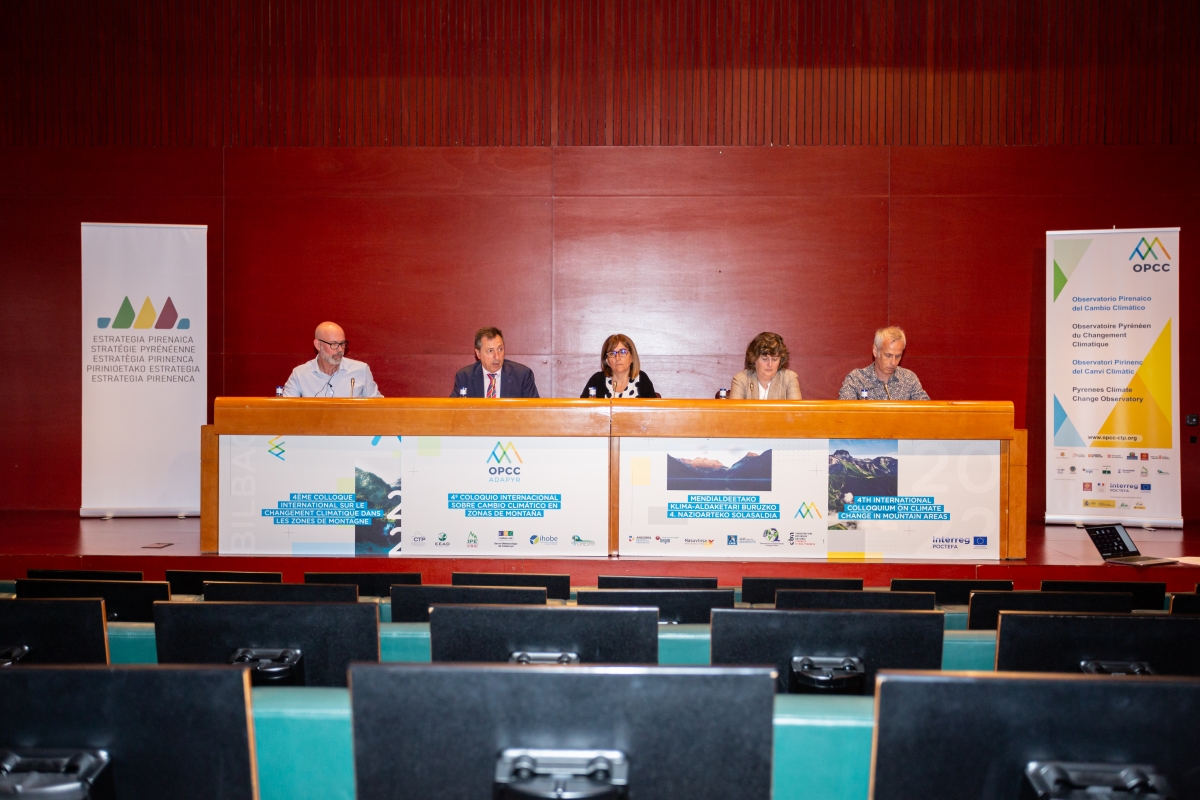 One of the main achievements of the OPCC-ADAPYR has been the elaboration of the first Pyrenean climate change strategy: the EPiCC, which has been successfully finalised. It is a unique approach in Europe, a document that highlights the guidelines given to achieve a specific objective: to make the Pyrenees a resilient territory by 2050. More than 500 actors have participated in its elaboration and it is the result of more than a decade of networking. The EPiCC is based on five key areas: climate, adapted mountain economy, resilient natural ecosystems, population and territory, and governance. In these areas, the seven regions have identified 38 guidelines and defined 72 priority actions, the result of analysis and reflection carried out jointly by institutional and technical partners and participatory meetings with local stakeholders.

In addition, the OPCC's ADAPYR project has given rise to other innovations, such as the development of an annual climate bulletin for the Pyrenees (BICCPIR), the design and implementation of environmental education and awareness-raising activities and the development of new functionalities and content in the OPCC geoportal, which is "a window on successful, innovative and replicable adaptation experiences in all regions". In addition, agreements have been signed to exchange data between the different meteorological agencies in the Pyrenees, and actions have been carried out to transfer knowledge to the socio-economic sectors through guides and new participatory processes that generate specific and useful information for the main socio-economic sectors in the Pyrenees (agropastoralism, tourism, energy, health). 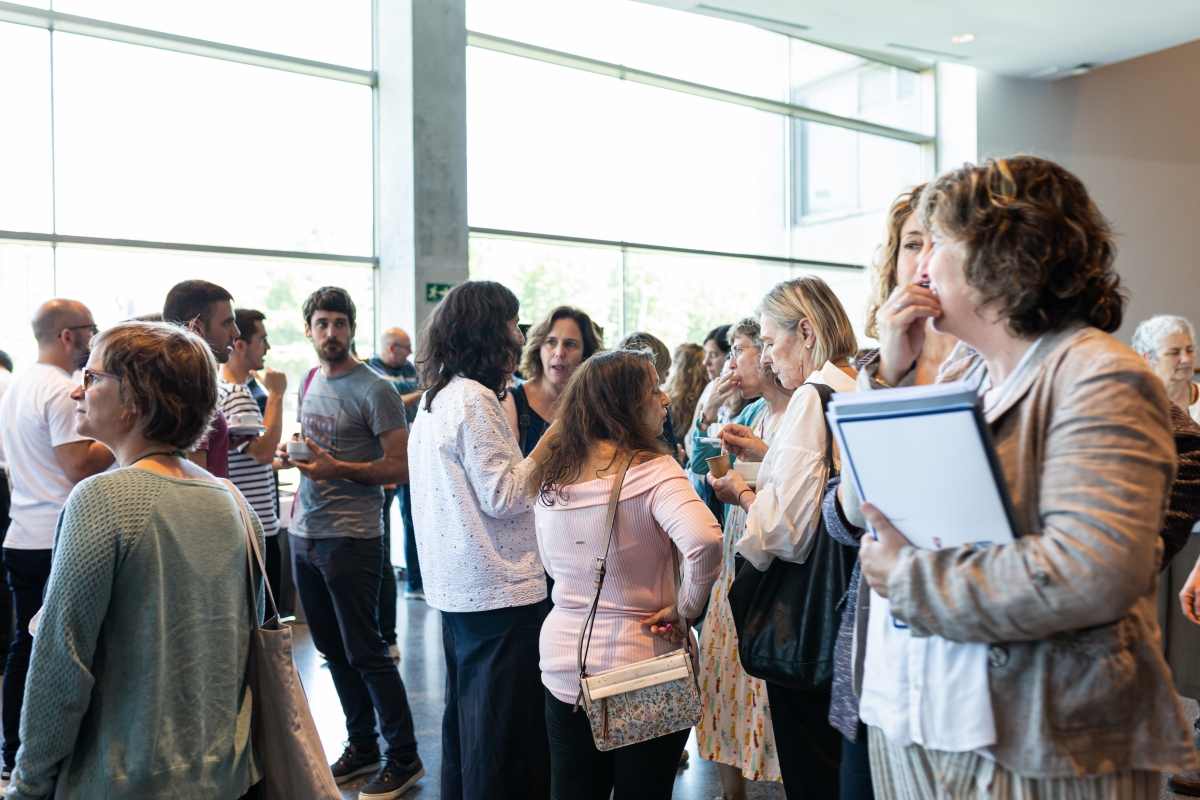 In order to give continuity to this project, and to promote the strategy defined by the CTP together with 47 entities, an Integrated LIFE project has been requested for 8 years, with which to implement the Operational Plan for the new EPiCC.

After a rich programme that allowed the main results of this emblematic project to be presented, the first culminated with the premiere of the documentary 'Al paso del hielo', a communication tool produced within the framework of the project that reflects the changes in the Pyrenean ecosystems due to glacial retreat in recent decades. The subject is presented from an original and different perspective, and has been presented by feature the renowned mountaineer Alex Txikon. 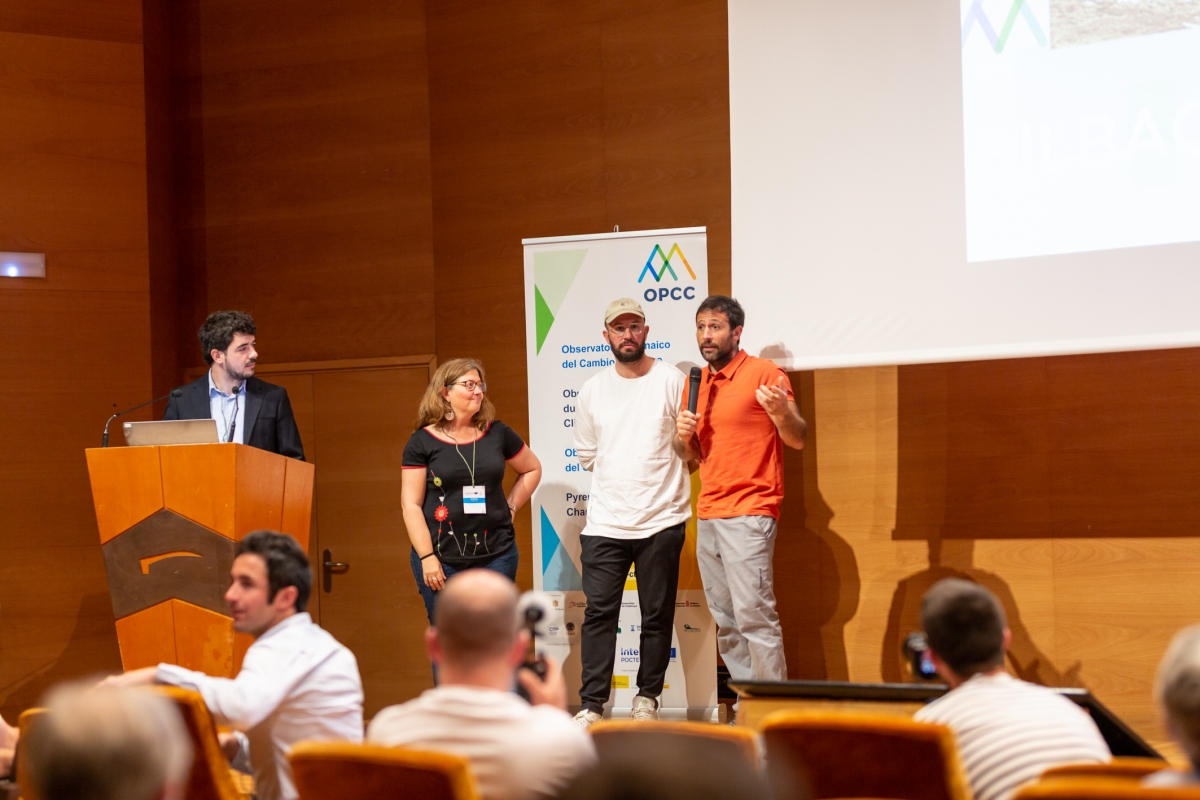 On the second day, 20 May, the results of other projects associated with the OPCC were presented in depth: ACCLIMAFOR, led by FORESPIR; FLORAPYR Avance, led by the Conservatoire Botanique National des Pyrénées et de Midi-Pyrénées; PYRMOVE (which deals with intervention on natural risks and climate change); and ADNPyr, a project for the enhancement of Pyrenean heritage and cooperation of the Réseau Education Pyrénées Vivantes network. 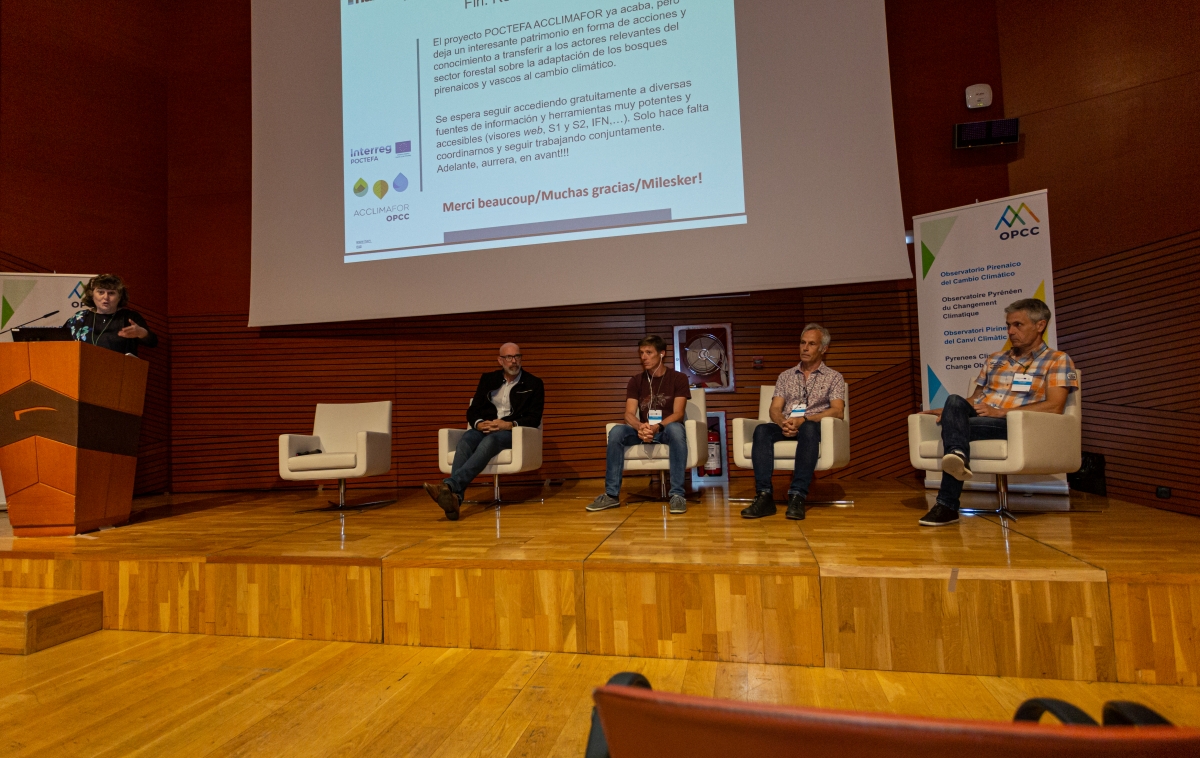 Did you miss the premiere of the documentary? You can watch it on the OPCC's YouTube channel.

Click here for the final report of the OPCC ADAPYR results.