The CTP accompanies the process of creating a Pyrenean Soils Alliance. 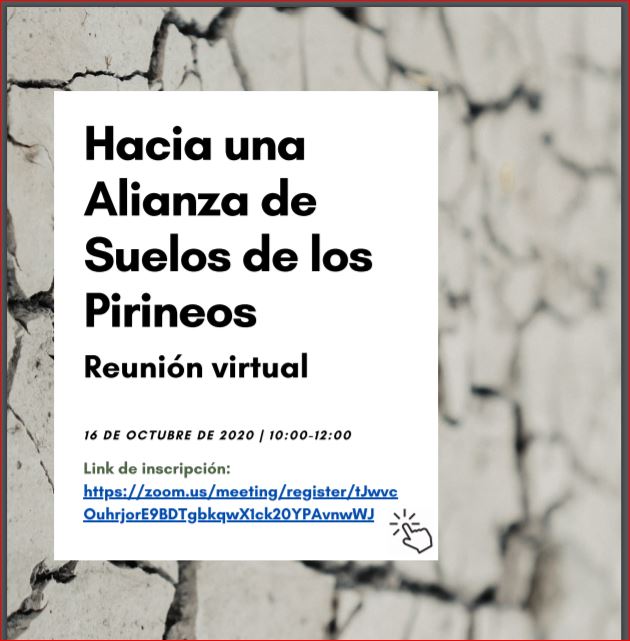 The CTP accompanies the process of creating a Pyrenean Soils Alliance.

According to the World Soil Charter (FAO, 2015), "Healthy soils are a basic prerequisite for meeting diverse needs for food, biomass (energy), fibre, fodder and other products, and for ensuring the delivery of essential ecosystem services in all regions of the world. However, humanity is facing unprecedented pressures on land resources. In particular, various types of degradation - including sealing due to rapid urbanization - are taking a heavy toll, threatening food security and ecological balance. With the Sustainable Development Goals currently under consideration and about to be implemented, it is essential to ensure sustainable soil management so that these goals can become a reality".

The Global Land Partnership  was established in December 2012 as a mechanism to interact with stakeholders and improve collaboration and synergy of efforts among stakeholders. From land users to politicians, one of the key objectives of the WSA is to improve the governance and sustainable management of soils.

The WSA is subdivided into regional (continental), state or homogeneous geographical area alliances, such as the Alpine Soil Convention which has proposed a Soil Conservation Protocol, which has yet to be implemented. They argue that although there are similar protocols widely implemented in national legislations, there is a need for a harmonized instrument at the scale of the entire massif.

It seems clear that a Pyrenean Soil Alliance would be a very useful instrument to be able to harmonise policies and actions in the Pyrenees between the 3 states, to promote soil conservation and maintenance of its quality, to coordinate and share experiences of sustainable soil management, and to ensure or increase carbon sequestration. These objectives are included in the recent EU mission "Soil health and food" and its publication: "Caring for soils is caring for life".

The scientific community has recognised that climate change has a significant impact on soil and particularly on its ability to fix atmospheric carbon. This capacity is, on the other hand, one of the tools identified for the mitigation of the increasing concentration of CO2 in the atmosphere, as well as for the adaptation of agrosystems to global change.

Extreme weather events such as droughts, heat waves, fires or extreme rainfall exacerbate the health of soils, affecting their ability to fix CO2 from the air (IPCC, 2014; EEA 2016).   In turn, changes in land use and soil can accelerate or slow down climate change, improving or worsening the capacity of soils to fix carbon in the air. Without healthy soils and sustainable management of this vital resource, we cannot address the climate crisis, produce enough food or adapt to a continuously changing climate. To join forces in the common goal of preserving Pyrenean soils also in the face of climate change, a Pyrenean Soils Alliance could be the ideal instrument.

Since the beginning of 2020, the precursor group of this alliance, led by researchers from all over the massif, has been preparing the first steps to launch the initiative. After several internal meetings, a survey of the main players in the territory was launched, aimed at identifying the interest of this initiative. Once the agents had been identified, a workshop was organised with the participation of 54 people from both sides of the border, where the draft of a membership document for the future Pyrenean Soils Alliance was presented.

We invite all those entities interested in joining the ASPir to send the signed membership document before January 31, 2021 to the e-mail address contact@ctp.org.

The CTP would like to thank all those who attended the workshop and invite you to join this interesting initiative in favour of the protection of one of our most precious natural resources, the soil.